THE ARK IN SPACE

Despite little in the way of pre-publicity ‘The Ark in Space’ saw Doctor Who’s ratings soar upwards, clawing in almost four million new viewers as the weeks went by. Episode 2 was watched by 13.5 million viewers – the show’s largest audience since 1965.

THE ARK IN SPACE

It may be irrational of me, but human beings are quite my favourite species.

Tom relaxes on a model of a Wirrn during a break in rehearsals for ‘The Ark In Space’. Picture © BBC

At a time in the far distant future, long after the Earth has been rendered uninhabitable by solar flares, a cross-section of carefully selected human survivors orbits the planet aboard Nerva, an automated space station. Deep frozen in suspended animation, they await their timed day of awakening, and their cue to reclaim the world…

Arriving aboard this silent ark in the TARDIS, the Doctor, Sarah and Harry discover the survivors have missed their wake up alarm by several thousand years. Worse, the station has been invaded by a nest of giant wasp-like insects, the Wirrn; parasitic creatures intent on devouring the remaining sleepers for both their bodies and their minds.

With time against them, the Doctor’s party, plus a small number of revived technicians, battle to prevent a newly hatched clutch of Wirrn from feasting on a very well stocked larder. Eventually the Doctor is successful, but before more humans can be safely woken, the Doctor determines to scout the Earth below to ensure it is safe for repopulation…

The Ark in Space is available on Region 2 DVD

The Ark in Space is available on Region 1 DVD

The Ark in Space is available on UK Blu-ray boxset

GENESIS OF THE DALEKS 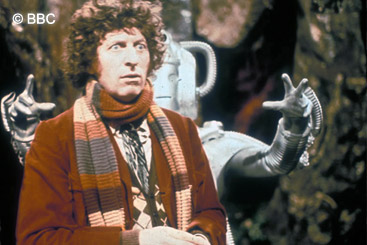 REVENGE OF THE CYBERMEN