Sarah Jane dead? No, impossible! Impossible. Only last week I agreed to do six new audio adventures with her for Big Finish Productions.

She can’t be dead. But she is: she died yesterday morning. Cancer. I had no idea she was ill; she was so private, never wanted any fuss, and now, gone. A terrible blow to her friends and a shattering blow for all those fans of the programme whose lives were touched every Saturday evening by her lovely heroic character, Sarah-Jane Smith. James Clevett took this picture when Doctor Who was filmed in Littlehampton.

Lis Sladen was very important to me, you know. When I joined the little world of Doctor Who, Lis was already a star. She had an enormous success with Jon Pertwee. She was good pals with the Brigadier, our beloved Nicholas Courtney; she knew all the regular directors. She was adored by Barry Letts, the producer who cast her in the role. She always said she was Barry’s girl. It was for that reason she decided to leave the show. But it was not necessary at all. The fans adored her, Philip Hinchcliffe, our new and glamorous producer, adored her, so did David Maloney, her favourite director.

Terry Walsh, the regular stunt man adored her. Once in deep, dark Wooky Hole caves Lis was almost swept away in a small boat, fifty feet from a terrifying black hole that looked like the entrance to hell. In a flash Terry Walsh dived in and caught the boat and all was well, thanks to the devotion of Terry. Lis was safe and and the show could go on.

Lis and Tom on Bessie right at the beginning of my time on Doctor Who.
Picture courtesy of the BBC

So when I replaced Jon Pertwee, it must have been an anxious time for Lis; it was a very anxious time for me. Following in the big footsteps of Jon was daunting. Tom Baker? Never heard of him. And so we started on the first story under Barry Letts as director. We did the location stuff first and I just obeyed orders; running about, with the Brigadier and that silly car Bessie Trotwood, I think it was called: too small for me, but also in its own way a “character”. Jon loved cars.

But back in the rehearsal room things were quieter and there was time to put in little details, time for Lis and me to get acquainted, time for me to try and make a little mark, so to speak. And Lis laughed at my silly antics; yes, she did, she laughed me to success. We both came from Liverpool, that small detail helped. We both loved old movies. And quite suddenly Lis and Ian Marter and Tom Baker were a trio. It is so consoling when one is sad and bereft to remember the good times, the laughter, the glamour; yes, the glamour: we three switched on the lights at Blackpool! A very great honour. We performed a little melodrama directed by (guess who?) yes, David Maloney! And now Lis was adored by Ian Marter and Tom Baker too. Switching on the Blackpool Illuminations in 1975. Picture © Blackpool Council

And it never ceased. And in the evenings Lis, would simply disappear back to wherever we were staying and the rest of us would often be raucous! And too soon she decided to leave; no fuss at all, all was calm. And Philip Hinchcliffe gave her lovely farewell party at the Hilton. Those sweet memories of happy days with Lis Sladen, the lovely, witty, kind and so talented Lis Sladen. I am consoled by the memories. I was there, I knew her, she was good to me and I shall always be grateful, and I shall miss her. I was thrilled when Lis came on my This Is Your Life in 2000. Here we are with John Leeson. Picture copyright Fremantle Media and Ralf Edwards Productions 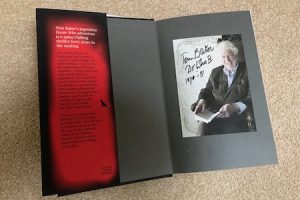 Autograph Shop closed for nowSome of you have been asking when Tom’s autograph shop will re-open.  The answer is that we do not know particularly because of the coronavirus crisis which puts restrictions on our activities and we have

END_OF_DOCUMENT_TOKEN_TO_BE_REPLACED

A glimpse of a Tom Baker smile while working from home during lockdown! ... See MoreSee Less

Wishing you a COSMIC Christmas and New Year Tom Baker! :)

A very Merry Christmas to you, and many more Mr Baker, your note and the many heartfelt responses here have brought a year to my eye 🥲

Age 9 or 10 I happened on THE Doctor on PBS here in the US. So intelligent, witty with an other worldly charm! ☺ My hero and my first innocent crush. That voice in itself is a treasure. It would be a dream come true to meet Mr. Tom Baker..one can dream. ☺ A very Merry Christmas to you sir and your loved ones. 💞 Also hoping for a much better New Year. 🌲🎅🎉💖

Tom. Please set a reminder that on 20th Jan 2034 you will reach your centenary and a universe full of a multitude of life will wish to share that occasion with you. I have it pencilled in already. And I have the Jelly Babies ordered :)

This is awesome, thank you tom baker. One of the best doctors and an all around good human being. Happy holidays and a happy new year to you and everyone else this christmas.

Merry Christmas Tom ✨ I was fortunate to meet you 4 years ago, it was fantastic!

If anybody has Audible, he's done a reading of "A Christmas Carol" this year! I haven't listened yet because I keep falling asleep, but how can it not be amazing?!

The happiest of Christmases and many more of them to the greatest living Scouser.

Tom. Dr Who. 5 year old me met you in the Longleat exhibition, April ‘77 and I have always remembered it! You were, are - and always will be - my hero. 💕

Merry Christmas, Tom! My lifelong love for Doctor Who began with your era. Thank you for that.

Wishing you a Happy and Healthy Holidays Tom! My father and son are huge fans!

"Christmas was invented in Britain in 1972, and has been very popular ever since".

Merry Christmas, Tom. May the new year be better than 2020 has been. If ever there was a year where we needed time travel, this is it! Relieved to know you have kept safe.

I am currently reading Low Life by Jeffrey Bernard and wondering what your old friend would make of this strange time Tom and would Norman serve him a scotch egg as a substantial meal in The Coach And Horses? Warm regards Tom, in keeping with this spooky and sobering Christmas . In 14 weeks time, the lawnmowers will be cutting grass again, I cling onto that hope.

Happy Christmas to you, and yours! Thank you for all the years of bringing characters to life... letting us escape into different times and places. You’ve been kind and gracious with sharing a bit of yourself with us. Happy holidays!

My Doctor Tom Baker I still have your autograph from spierings book shop in Salisbury. Happy Christmas too you!!!

Happy Xmas Tom, to you and your family & friends, these little Xmas messages have become one of the highlights at this time of year , never mind given the current situation ! Stay safe !

Happy Christmas Tom. It's always good to see a little something from you from time to time. It lifts my spirits and makes me smile. Best wishes in every way for 2021.

Merry Christmas, From Canada, your sir are the closest thing to superman, as far as my husband is concerned, he,always loves watching dr who at Christmas, he's upstairs watching the keeper of traken right now,with our cat "tom baker" right now,lol Merry Christmas Sir! And god bless!

My favourite Dr ! I grew up watching Tom with that manic toothy grin and using the catchphrases of previous doctors such as "helllo," and "would you like a jelly baby". He made the character his own, and, he's an ex medic too! Merry Christmas Tom.

You stay safe and well Tom, I can't begin to tell you how much you mean to me from my childhood to today. Thank you for so much enjoyment on tv and your work on Big Finish.

Merry Christmas, Tom! Warm regards to you and your family! Always a thrill to meet you. Best wishes always, now and in the future Xx

Tom baker the Man of many wizardrey fantastical proportions of skill ! Merry Christmas to you and your family . From me and mine , keep rocking .